Are you called to “the ministry”? To the mission field? To be a pastor? Deacon? Counselor? Businessman? Stay-at-home mom? Politician? Godly father?

What does it even mean to be “called”? Are we talking about a vocation? A responsibility? Do you hear a voice? Is this a supernatural kind of moment where you can mark the day and say, “This is when God called me . . .”? Or is it simply a convictional experience where you sensed God’s specific direction in your life?

What is your calling? I found the answer, in case you were wondering.

Examine the word “calling” in all of its forms in the Scriptures, and you will not find anything about a voice from heaven or a startling conviction. No lightbulb moment or tear-jerking walk down an aisle.

Perhaps you could defend the idea that you are called to be a pastor or missionary. Paul was “called” to be an apostle. The disciples were “called.” Saul and Barnabas were set aside for a particular work, having been “called.”

But before you label every decision and direction in life as a “call” from God, hold that thought. Please note the surprising things you are called to, Christian. 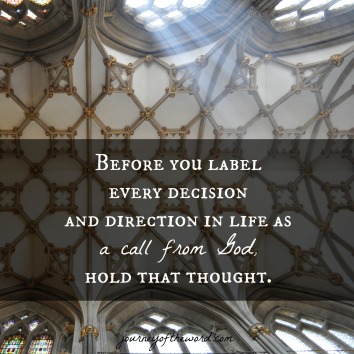 You are called to belong to Jesus Christ. You are his child and a saint. Not because you decided anything. Because God and his gospel called you.

It is a holy calling. A darkness-to-light kind of thing. And because you are called, you are predestined, and you are justified, because those things just don’t separate.

Think about it. God found something pitifully weak, common, foolish, and despised, and made it into something strong, wise, and powerful, so that the world would see it. That’s what your calling looks like. That’s the purpose to which he has called you, and we know that everything will work together for your good because of that.

To what were you called? You were called to a hope. One hope: eternal life. And thus, eternal glory. A glory and an excellence that is his alone. This glorious hope belongs distinctly to your calling.

At the risk of sounding a bit simplistic, my encouragement to you is to concern yourself not so much with what else you’re “called” to, if you’d like to call it that. Rather, focus your attention on walking in a manner worthy of your calling.

Because that’s what he says to do.

And he doesn’t leave you wondering what it is.

5 thoughts on “your calling”