What’s the number-one religious ritual you were taught as a child?

It is not tithing or gift-giving. It’s not wearing your Sunday best or carrying your Bible to church. And it’s not reciting the Lord’s Prayer.

Most likely, whether or not you were raised in a Christian home, you were taught to say, “Thank you, God, for our food.” Three times a day. 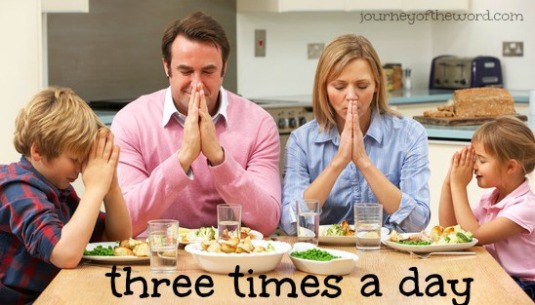 Before the first bite is taken, religious people the world over pause to say a blessing over the meal. And my guess is, they rarely consider why they do it.

Whether it’s the patriarch of the family reciting “Thee’s and Thou’s” or a young child’s innocent, “God is great, God is good,” it’s an expected part of everyday life to “say grace.” As though the food might not be edible if we don’t.

I believe there are two reasons why Christians should consider giving thanks before a meal is served.

But first, Two Possible Reasons to Abandon the Mealtime Prayer:

1. There is no mandate in Scripture. We habitually practice it as though there is such, but if you conduct a Scripture-search, you will find that there is no command or teaching calling Christians to pray over their meals. While there are passages which certainly speak to the issue, we can be confident the Bible never says, “Thou shalt not forget to pray before eating.”

2. Traditions can hinder. If you do anything simply for the sake of tradition, don’t.

See to it that no one takes you captive by philosophy and empty deceit, according to human tradition, according to the elemental spirits of the world, and not according to Christ. Col 2:8

Traditions carry meaning. Is the mealtime-prayer tradition driven by a biblical purpose? Or is it simply a habit that you were taught as a child, that, if forgotten, may lead to grave illness {or so you thought}? That is the question.

Traditions ought to happen by accident when we do something biblical over and over again. Otherwise, we should rethink our traditions.

You leave the commandment of God and hold to the tradition of men.

You have a fine way of rejecting the commandment of God in order to establish your tradition!

. . . thus making void the word of God by your tradition that you have handed down.

As for Two Possible Reasons to Uphold the Mealtime Prayer:

Then he ordered the crowds to sit down on the grass, and taking the five loaves and the two fish, he looked up to heaven and said a blessing.
Matt 14:19

And directing the crowd to sit down on the ground, he took the seven loaves and the fish, and having given thanks, he broke them . . . Matt 15:35-36

And he took a cup, and when he had given thanks he gave it to them, and they drank all of it. Mark 14:23

When he was at table with them, he took the bread and blessed it and broke it and gave it to them. Luke 24:30

[And, in one instance, Paul:]
And when he had said these things, he took bread, and giving thanks in the presence of all, he broke it and began to eat. Acts 27:35

What does it mean that Jesus “blessed” the food? What about the cases where Jesus (and others) ate and did not pause to give thanks (e.g. Luke 24:42-43)?

Perhaps Jesus usually blessed his food, and perhaps others often gave thanks for a meal, but, in their doing, was a standard set in place?

2. We are to give thanks for everything. Supposedly, the reason we say a mealtime prayer is because we’re thankful for the food, right?

While I want to be a thankful person, the first words out of my mouth in any given everyday conversation aren’t, “Thank you.” Our relationship with God is very strange, you might say. We thank God every time we speak to him.

. . . giving thanks always and for everything to God the Father in the name of our Lord Jesus Christ. Eph 5:20

There you have it. The answer we were looking for. If you want to honor the Lord in your eating, you will give thanks to God.

But that’s not the end of it. If you want to honor the Lord in your abstaining, you will give thanks to God.

Whether or not you are sitting down to eat, give thanks to God.

I, for one, leave this conversation challenged in three ways:

1. Mealtime prayers, as a tradition, can have little to no meaning. Empty words.

2. While Scripture doesn’t command Christians to bless their food, it suggests that giving thanks to God is in order.

3. Thanksgiving should always be on our lips, at mealtime and otherwise.

You ask me? I say, skip the “blessing” and the saying of “grace,” and thank the Lord. For your food and for everything else. Always.

And whatever you do, in word or deed, do everything in the name of the Lord Jesus, giving thanks to God the Father through him. Col 3:17

7 thoughts on “three times a day”