I suppose it’s one of those battles that will never die. Anytime a theological topic hits the headlines, you can be sure: It’s not the first time Christians have entered this verbal war. Nor will it be the last.

“We are not under the law, but under grace.”

“Yes, but we have to be careful to obey everything God has written.”

“Yes, but not the old law. We are New Testament Christians. We are under grace.”

“Yes, but that doesn’t mean we do anything we want.”

“Yes, but it does mean we have Christian liberty.”

It’s a reality of this fallen world, I suppose, but a sad one for sure . . . that self-professing Christians, who supposedly start with the same Absolute Truth, end up in varying places, and some of them downright contradictory.

I recently studied Romans. There, I found 3 Surprising Law-and-Grace Absolutes. Surprising, because it seems many Christians come to different conclusions than these.

1. We are released from the law.

You also have died to the law through the body of Christ, so that you may belong to another, to him who has been raised from the dead, in order that we may bear fruit for God. For while we were living in the flesh, our sinful passions, aroused by the law, were at work in our members to bear fruit for death. But now we are released from the law, having died to that which held us captive, so that we serve in the new way of the Spirit and not in the old way of the written code. 7:4-6

That one makes the ‘grace people’ happy.

And, once again, it sounds like grace has taken over and we are not bound to the law.

Do we then overthrow the law by this faith? By no means! On the contrary, we uphold the law. 3:31

And now the ‘grace people’ aren’t happy. “What?! The law still stands for something? It’s not null and void?”

While I’m at it, allow me to point out a few further “law positives.” Then you can clobber Paul all you want. He can take it.

Through the law comes knowledge of sin. 3:20

What then? Are we to sin because we are not under law but under grace? By no means! 6:15

What then shall we say? That the law is sin? By no means! Yet if it had not been for the law, I would not have known sin. 7:7

Time out. We are not under the law, but we should not sin. In order to know how to avoid sin, we have to abide by the law, because the law shows us what is sin and what is not. Time in.

So the law is holy, and the commandment is holy and righteous and good. 7:12

For the law of the Spirit of life has set you free in Christ Jesus from the law of sin and death. 8:2

Yes, there are many other things said about the law and grace. Yes, you need to understand them all in context. Yes, the big picture is important.

But, I think we would be surprised at things the Bible actually says because sometimes we hear only the things we want it to say. {Ouch.} 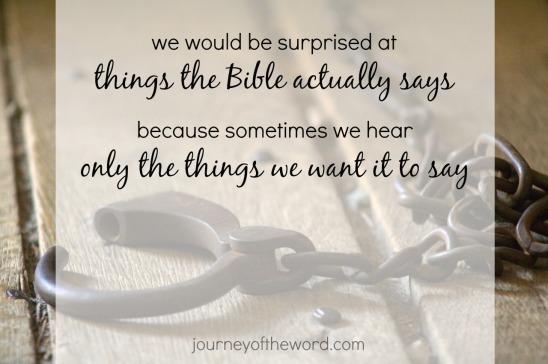 That being said, here’s my suggestion.

I just got you started. You take it from here.

2 thoughts on “ending the law-grace debate”