“We should listen more often than we speak. Why else did God give us two ears, but only one mouth?”

Well, he may have had other reasons, but I think we’d agree that holding our tongues and being careful to listen is a virtue. And one spoken of often in Scripture.

Let every person be quick to hear, slow to speak, slow to anger; for the anger of man does not produce the righteousness of God. 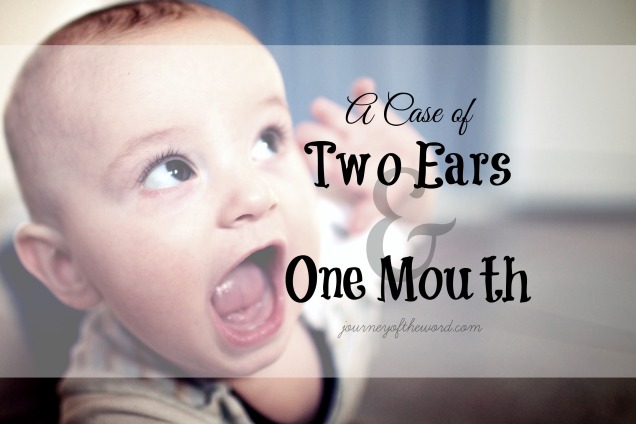 Let’s zoom out for a sec. Read slowly and notice what James says about the word.

Of his own will, he brought us forth by the word of truth, that we should be a kind of first fruits of his creatures.

Know this, my beloved brothers, let every person be quick to hear, slow to speak, slow to anger; for the anger of man does not produce the righteousness of God.

Therefore put away all filthiness and rampant wickedness, and receive with meekness the implanted word which is able to save your souls.

But be doers of the word, and not hearers only, deceiving yourselves. For if anyone is a hearer of the word and not a doer, he is like a man who looks intently at his natural face in a mirror.

In the context of this word, James refers three times to hearing.

Imagine a person who is living in sin and loving it. They hear the word of truth which can save them, but that word also commands them to repent of their life of sin. They don’t want the word to change them, and they’re upset that the word would require such a thing of them. So they respond to what they hear with an outburst of anger, rejecting the word which saves in order to hold onto the life of sin they so strongly desire.

Now imagine a different scenario. A person who is living in sin and loving it . . .  They hear the word of truth which can save them, but instead of questioning and scorning and rejecting it, they continue to listen, allowing the word to work in them the righteousness of God. Their hearing becomes doing, as they submit themselves to the transforming power of the word, and the life of sin they once enjoyed soon fades.

So it seems we have a case of receiving vs. rejecting the word, not a case of two ears, one mouth.

Let every person be quick to hear the word.