Of their beauty. Of a banquet. 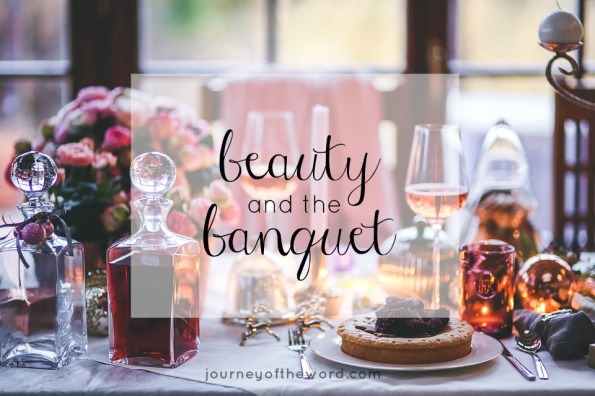 For when Herodias’ daughter came in and danced, she pleased Herod and his guests.

The young woman had a beautiful figure and was lovely to look at. The king loved Esther more than all the women, and she won grace and favor in his sight more than all.

In both cases, a portrayal of beauty.

Herodias’ daughter flaunts herself in what surely must have been a provocative dance. Perhaps Herodias was really the one to blame, placing her daughter in this position at such an age of vulnerability. Yet no one, neither Herod nor his high-ranking guests, protests such an inappropriate display.

Esther was chosen for her physical beauty, yes. Perhaps the heart of Ahasuerus was no more pure than Herod’s. But in surrounding passages, we discover the way in which Esther presents herself: always with grace and humility. She’s not in it for personal gain. She probably doesn’t care to be there in the first place. But she proceeds honorably until the beauty of her heart outshines any other kind.

An opportunity came when Herod on his birthday gave a banquet.

“If I have found favor in the sight of the king, let the king and Haman come to the feast that I will prepare for them.”

Herodias seizes the moment when her husband, likely half-drunk, is ready for a night of entertainment. She’ll parade her young daughter before him, and maybe he’ll offer something in return. If she’s lucky, she’ll get him to kill John before he even realizes what he’s doing.

Esther prepares a banquet. And then another. For her, it’s an opportunity to properly appeal to the king with sincerity and respect.

And the king said to the girl, “Ask me for whatever you wish, and I will give it to you. Whatever you ask me, I will give you, up to half of my kingdom.”

“What is your wish, Queen Esther? It shall be granted you. And what is your request? Even to the half of my kingdom, it shall be fulfilled.”

The same offer. “Up to half of the kingdom.” Not that a king would literally give anyone half his kingdom, or that anyone would reasonably want it. But who makes such an outrageous offer?

A distracted king who is consumed with pleasure. He offers half his kingdom to a teenage girl, because she made him happy for a minute or two.

King Ahasuerus, on the other hand, is intrigued by the daring maneuver of an honorable woman. A woman who has graced his home, come boldly to his throne, and shown respect at every turn.

“I want you to give me at once the head of John the Baptist on a platter.”

What would you do if a king offered you half his kingdom?

Well, you could have a man killed. A man who, with a few words of truth, has turned your mother into a raging storm. You would love to get rid of that man in the prison cell if it calms your frantic mother.

Or you could save an entire race of people. You could gently open the eyes of your husband-king to the wicked decision he has carelessly made, and because he’s pleased not just with your physical beauty, but with the beauty of your character, you could save thousands of lives and impact the course of history.

And immediately the king sent an executioner with orders to bring John’s head. He went and beheaded him in the prison.

In every province and in every city, wherever the king’s command and his edict reached, there was gladness and joy among the Jews, a feast and a holiday.

While we know nothing happens that God himself does not ordain, the impact of these two stories for me is the fact that a beautiful woman at a banquet had a say.

And oh, the weight of their words.

What will you do when the opportunity comes?

Like Herodias’ daughter, there’s always the choice to flaunt and scheme and kill.

Or, like Esther, you can walk in favor with God and man, fast and pray for God’s help, and do everything in your power to change the world.

The choice is yours.

{The passages above quote only small portions of the stories.
Please read Mark 6:14-29 and the book of Esther for the complete and definitive accounts.}

17 thoughts on “Beauty and The Banquet”