Sometimes, you have this glimmer of hope that things will become more clear. And as you think and search and converse, they become less so. True of my weekend and the attempt to answer “Whose Condemnation?” It’s a fun time. {But really.}

Who is to be justly condemned, according to Paul in Romans 3:8?

And why not do evil that good may come? — as some people slanderously charge us with saying. Their condemnation is just.

(1) Paul himself, if he were to actually say such things
(2) The people who falsely accuse Paul
(3) Anyone who says such things
(4) Or perhaps there’s another option

Allow me to get technical for a bit, because this one is no less than complicated. Unless you’re a fan of details, the concluding thoughts will be most worth your time. So if you’re not up for the technical stuff, scroll below the magnifying glass. {And don’t forget to read the votes on the original post. They’re pretty insightful.}

Using my I-don’t-know-much-about-Greek glasses, it looks as though the word “their” doesn’t really exist in some of the original writings, so maybe it was added for flow of thought. The sentence structure, no matter how you look at it, leaves things quite ambiguous.

Compare reliable translations, and you will essentially come up with all three possibilities (#1, #2, & #3). Some translations attempt to answer the question, but it would seem that this is simply a liberty taken by the translators.

As for the plain grammar of it, I personally think #1 makes the most sense.

And why not do evil that good may come? — as some people slanderously charge us with saying. Their condemnation is just.

Logically, #1 works. Paul was just talking about people who are condemning him. And so he basically says, “They have charged us with taking advantage of grace. If we are twisting the gospel in this way, they should be upset about that. But we’re not.”

Now, to be sure, the other options make sense as well. Which is why I’m going to go with the fourth option. 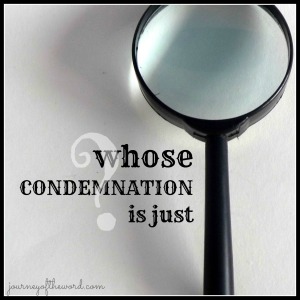 In Romans 3:8, whom does Paul say should rightly be condemned? My vote is #4: “Perhaps there’s another option.” {Knew I should offer a way of escape . . .}

Let me explain my vote with three quick statements.

1. Answers #1 & #3 go together. So if #1 is true, #3 is also true, and vice versa.
2. All three possible answers are logical and biblical in the context of the passage.
3. The answer is unclear, so perhaps we shouldn’t seek to make it clear.

I think our proper response to all of this is two-fold.

Aim to know everything about the Word of God.
And revel in the fact that, try as you might, you never will.

2 thoughts on “their condemnation is just”