She lost her husband, and life suddenly looked pretty bleak. But at least she had her family and her home.

Her mother-in-law, also recently widowed, decided she was leaving and going back home to her own people and her own heritage.

Ruth’s first reaction was to go with Naomi. It was the expected thing to do. She couldn’t be so inconsiderate as to send her poor mother-in-law back on her own, so, without much of a thought, she went with her.

But when Naomi quite literally stopped her in her tracks and suggested otherwise, Ruth suddenly had two weighty options to consider. 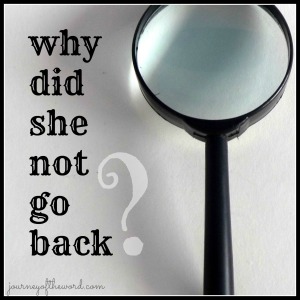 1} She could go back home. Made sense. Home meant security, comfort, prospects of marriage, family members who could help. And Naomi just gave her permission. Sounds like an easy decision to me.

2} She could go with Naomi. But this would be difficult. She would have to make a foreign land her home and provide for her mother-in-law for the foreseeable future. Miles away from any familiarity. Complete life change. Why would she decide to do that except perhaps out of obligation to her mother-in-law? But, remember – Naomi just gave the okay. Actually, Naomi urged Ruth to go back. She tried to convince and persuade her. Even Naomi expected this second option to be much less desirable for Ruth’s future.

That’s why it’s simply shocking and puzzling to me that Ruth clung to Naomi and refused to go back.

Ruth said, “Do not urge me to leave you or to return from following you. . . . May the Lord do so to me and more also if anything but death parts me from you.”

And when Naomi saw that she was determined to go with her, she said no more.

Here are my speculations regarding why Ruth chose to do the hard thing.
{Side note: Special thanks to the one brave soul who left a comment on the original post, and to the 27 other lame souls who either (1) merely clicked and didn’t read, (2) read and were too shy to make a suggestion *oh, please*, (3) or read, got busy, and forgot to come back and share their brilliant insights.}

I believe Ruth chose to leave her home and join Naomi’s for two reasons.

1} For Ruth, caring for Naomi was the right and noble thing to do. Ruth was a woman of character. While she must have had some fears and concerns, this decision was selfless and courageous on her part. She chose to risk giving up a life of relative ease and a promising future to devote herself to a woman she respected. If Ruth didn’t care for Naomi, who would? Though it may be presumptuous to say her sister-in-law, Orpah, chose selfishly, it is not difficult to see that Ruth chose selflessly.

Boaz to Ruth: “All that you have done for your mother-in-law since the death of your husband has been fully told to me, and how you left your father and mother and your native land and came to a people that you did not know before.” 2:11

Boaz to Ruth: “All my fellow townsmen know that you are a worthy woman.” 3:11

2} Ruth saw something in Naomi and her God that she wanted. The thoughts going through Ruth’s mind were surely spiritual in part. The decision to leave home, heritage, and faith for another is no quick and easy decision. For the Gentile Ruth to adopt the life and ways and God of her Jewish mother-in-law, there had to be something, or Someone, working in her heart to lead her to that point. This was no last-minute life commitment. It seems that Ruth had a devotion to Naomi that went far deeper than family ties.

Boaz to Ruth: “The Lord repay you for what you have done, and a full reward be given you by the Lord, the God of Israel, under whose wings you have come to take refuge!” 2:12

So I speculate. And in my speculation, I know that it is just that – speculation. But even still, I can reflect on at least two counts.

1} Ruth’s character shines brighter and more fully every time I read of her and listen to her and watch her and place myself in her story. Available and willing. Waiting for just the right timing. Showing compassion and love in the most sacrificial way. Respectful and honoring in her words and actions. Dependable and diligent. Loyal, patient, sensitive, and wise. Lord, cause me to grow in such selfless and Christlike ways.

2} At a very young age, I left behind a life full of sin to pursue what I knew to be something greater – and found to be a perfect redemption. Thank you, Lord, for covering me with your wings, for there I have found the refuge for which I longed.

One thought on “why she did not go back”